I was at a CITT Toronto Area Council networking event a few weeks ago, and met a couple of young professionals who had less than 2 years of experience each. They asked me a question I hadn’t really considered before.

They had each worked for only one employer, and had each reported to the same person for the entire time. So if they were applying to a role elsewhere, how could they get a reference from their current employer without raising any flags?

Here are a few ideas we came up with:

If you recently completed school, using a college professor could be a viable option, depending on the hiring policies of the company you’re applying to, and how closely you worked with that professor.

Using someone who was superior to you in another department of your company could be another option, though this option is less than ideal. We typically like to complete references with someone you directly reported to.

If you reported to someone who has since moved on to another opportunity, make sure you keep in touch so you can use him or her as a reference.

Written performance reviews signed by your manager will often make an acceptable reference.

The final option is to accept a job offer contingent on successful completion of reference checks. Then give your resignation and ask for a reference. This option may seem risky, but I have seen many jobseekers go this route without an issue. If you did a good job for the organization and have a good relationship with your boss, most managers will provide a positive reference even after you’ve given your resignation.

I hope this helps! 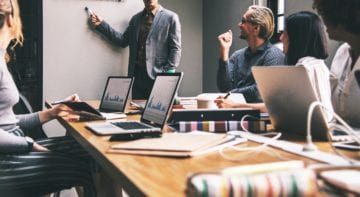